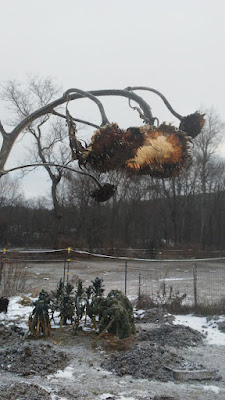 I wrote some poems in November. I wrote some notes about the poems, too. Like, we are never actually alone. And, it's not a calling if you can say no. In general, it's not the past or future we're concerned with, it's the way time functions as a screen upon which certain narratives are cast. Certain spells? The whole thing is basically a distraction from the caster (the projector (the poet)) but why?
Ask and it shall be given really means that we do not need to fear desire, and the end of fear is the remembrance of Love, which never leaves, so nothing remains to desire anyway. Technically! Without time, there can be no distance and vice versa, the whole apparent structure of the cosmos indicates a lawfulness upon which we can rely unconditionally. The forest is not only trees and rivers and scrub brush but also creatures and paths, i.e., home is a network not a place. All expressions of the earth are multivalent and holistic. Fire is not flames but it's not not flames either. What is a system is a good question.
The answer to the question of loneliness (which question is an answer to another question) is "not really but it feels that way sometimes." Much grief is obviated by honesty. Some of the poems are more related than others, i.e., it's possible I'm mistaken, hence my ongoing commitment to learning. Leaning? Well, listening anyway. I am grateful to and for you, I really am.
I've always liked the phrase "promises promises," both as a pejorative and an insistence of some original benevolence. In general, the whole twenty sentences project aims to rethink locally certain rhetorical strategies advanced in the twentieth century, e.g., use of the word "baby" and "babe" to refer to women upon whom we depend. We all know what's going on, right? The projected object of desire is a cover for fear and we don't know what we're scared of and what we're scared of doesn't want us to find out. Sex with holograms is not as fun as it used to be! Did I mention screens?
There is no way out - knowing that is the way out. Related: crucifixion and resurrection are distractions but distractions from what? And for what? If you answer at all then you don't know the answer. But if you don't answer, then the question can't even be asked.
Anyway, November poems.
Tired of Pretending
Apostles of Love
Prior Winters
One More Theophany
Measured by Crows
Focused on the Flames
The Last Workable Prayer
Prior Witnesses
Nobody's Baby
No More Dirty Silver
Yet Another Theophany
Only One Trail
An Incident at the Temple
The End of Weddings
Posted by Sean at 4:30 AM

Email ThisBlogThis!Share to TwitterShare to FacebookShare to Pinterest
Labels: Poems

"This site uses cookies from Google to deliver its services and analyze traffic. Your IP address and user-agent are shared with Google along with performance and security metrics to ensure quality of service, generate usage statistics, and to detect and address abuse."